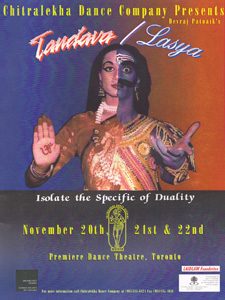 From November 20th to 22nd, 1998, Toronto's Premiere Dance Theatre thronged with art-lovers, enticed by the brain-child of Devraj Patnaik, Tandava/Lasya. Abstract and dualistic, it counterpoised the hard and soft styles of Odissi in a compelling and beautiful sequence of comparisons.

The first of these was Namastasyei Maa, a Sanskrit Abhinaya depicting the great ten-armed warrior-goddess Durga. Choreographed by Devraj Patnaik to music composed by Bhubaneswari Mishra, it was performed by the trio of Chitralekha, Ellora and Devraj Patnaik. They entered the stage bearing candles with which homage was paid to Lord Jagganatha, the deity of Odissi and the Ruler of the Universe. The devotees then invoke the blessing of the Great Mother, who is Strength and Peace.

The music for Kedar Pallavi was a product of the artistic union of Pandit Jyotindra Prasad Mishra and Devraj Patnaik, and marked Devraj's debut as a composer of Indian classical music. The dance was choreographed by guest choreographer Bichitrananda Swain of the Orissa Dance Academy and performed as a duet by Ellora and Devraj Patnaik.

Chitralekha Patnaik then performed the beautiful and sensuous Oriya Abhinaya Nahin Kiye Karidela, a piece of her own choreography which channeled the despair of the heroine as she awaited the overdue arrival of her beloved hero. The heroine tells her Sakhi (dear friend), "Who does he think he is? Please tell me, dear friend…"

Ardhanariswara (the Half Shiva Half Parvati form) is a comparison of Shiva to Parvati which demonstrates their transcendental unity through the various dissimilarities of their aspects and attributes. The devotees describe Lord Shiva as Tandava (the aggressive) and Parvati as Lasya (the soft). This spectacular choreography by Bichitrananda Swain to the musical genius of Ram Hari Das allowed Ellora and Devraj Patnaik to showcase their mastery as never before, and now stands as an edifice of the Odissi repertoire.