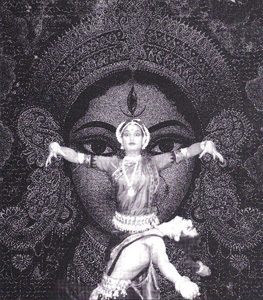 Nrutya Utsav, meaning The Festival of Dance, was a series of unique Odissi works by different Odissi choreographers, presented by the Chitralekha Odissi Dance Creations.

The evening began with Shiva Panchak, a Sanskrit invocation to Lord Shiva choreographed by Padmashri Gangadhar Pradhan to music composed by (the late) Sangeet Sudhakar Balakrushna Das. It describes Lord Shiva as the great god, the Lord of Dance, who is adorned in serpents, has three eyes, smeared in ashes, and wields a trident. "O Lord Shiva, Beloved of Parvati, release us from this worldly bondage!" It was performed by the trio of Chitralekha, Ellora, and Devraj Patnaik.

Shiva Panchak was followed by Gati Beda, a Pallavi in Raga Bageshri with the interesting layakari rhythm {1.5, 3, 5, 7, and 9 beats}. It was choreographed by (the late) Padmabibhusan Kelucharan Mohapatra to music composed by (the late) Pandit Bhubaneswar Mishra and featured live orchestra–Devraj Patnaik on pakhawaj and Azalea Ray on vocals–and guest artist Manoranjan Pradhan of the Orissa Dance Academy, who performed this crowd favorite with Ellora Patnaik and four company dancers: Tanya Raha, Meenu Maltby, Sumona Sen and Malini Guha.

The next piece was the Oriya abhinaya Chaddidere Kanha Jibi Mun Jamuna, a choreographic work of (the late) Padmashri Pankaj Charan Das. Chitralekha Patnaik performed this solo item, portraying Radha, the Beloved of Krishna, as she pleaded with him to let loose her hand so that she can pursue her obligations at the river Yamuna. She says, "Leave me, Krishna! I must go to Yamuna."

Following the intermission, Manoranjan Pradhan gave a solo performance of his own choreography in the Chhau style, based on the divine attributes of Lord Shiva.

This was followed by Matru Vandana, an invocational piece in honour of Mother India, performed by a group of eight company dancers Tanya Raha, Meenu Maltby Sumona Sen, Sulogna Sen, Malini Guha, and Anjali Pathak. Matru Vandana was choreographed by (the late) Padmashri Pankaj Charan Das, and depicted selected aspects of the mythology, history, and geography of India. "You are our Mother Land, the pure Land of India! We are your children forever!" Manoranjan Pradhan and Ellora Patnaik then danced the difficult and energetic Kiriwani Pallavi as a mirrored duet, bringing life to the superb choreography of (the late) Padmabibhusan Kelucharan Mohapatra and composition by (the late) Pandit Bhubaneswar Mishra.

For the final item of the evening, Ellora and Devraj Patnaik danced Naba Durga, an invocation in homage to the Goddess Durga and her nine aspects, choreographed by (the late) Padmashri Pankaj Charan Das to music composed by (the late) Sangeet Sudhakar Balakrushna Das. The nine apects are Bana Durga (She of the Forest), Maha Durga (The Great Goddess), Giri Durga (She of the Mountains), Jaya Durga (The Victorious Goddess), Shuli Durga (She who Impales), Durga Mahisaamardini (She the Slayer of the Demon Mahisa), Shakti Durga (the Goddess of Strength), Ghor Durga (the Monstrous Goddess), and Chandal Durga (the Witch Goddess). The devotees say "Victory to the Great Goddess Durga! Bestow a boon unto us!"