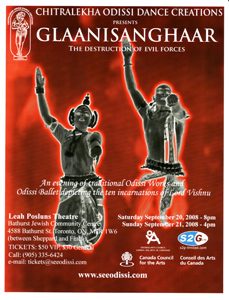 Glaanisanghaar, literally "The Destruction of Evil" was CODC's first major work as well as its most frequently requested and performed ensemble piece. This presentation of the Odissi Ballet was the twelfth and most recent presentation.

The evening began with Geeta Govinda, written by 12th century poet Jayadeva. Ellora Patnaik choreographed this piece composed by Gopala Panda and rendered by Binod Bihari Panda. As Ellora Patnaik, Ankita Sarker, Shukla Fuad, and Pallavi Baluja formed silhouette images against the cyclorama, Devraj Patnaik presented this solo as the narrator praising Lord Vishnu. The song describes Lord Vishnu as beloved of the Goddess Laxmi, the Lord of the Sun God, Destroyer of the Serpent Kaliya, Madhu, Mura, and Naraka, appearing the form of Lord Jagnnatha, marrying Janaka's daughter Sita, and upholding the Mandara Mountain in the form of the Tortoise. Jayadeva says, "Sing sing the glory of Lord Vishnu!"

The next item was Shankaravaran Pallavi composed by (the late) Pandit Bhubaneswar Mishra and choreographed by (the late) Padmabibhusan Kelucharan Mohapatra and presented as a trio by Amita Tanya Raha, Ankita Sarker, and Pallavi Baluja.

Chitralekha Patnaik then presented the solo Madhuraashtakam as she did at the 1995 production of Glaanisanghaar. Composed by (the late) Sangeet Sudhakar Balakrushna Das and choreographed by (the Late) Padmashri Pankaj Charan Das, this item describes the many glorious attributes of Lord Krishna from his infancy to adolescence. The devotee says, "All aspects of the Lord of Sweetness are Sweetness personified!"

Glaanisanghaar is the tale of Das Avatar, the Ten Incarnations of Lord Vishnu; a Sanskrit Text which inaugurates the Geeta Govinda, written by 12th century poet Jayadeva. The poet describes the ten incarnations in the Geeta Govinda with great brevity due to the vastness of the tales, however in Glaanisanghaar the Oriya lyrics are just as brief but the ballet has incorporated more elaboration of the tale through music.

Lord Vishnu came down in the form of:

The dance drama itself, composed by (the late) Sangeet Sudhakar Balakrushna Das, being the choreographic legacy which (the late) Padhmashri Pankaj Charan Das entrusted to the direction of Ellora Patnaik, remained unchanged as the second act of the evening, the rendition of the first act was somewhat different from the 1995 production.