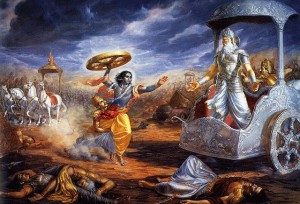 Bhishma marked the inauguration of Devraj Patnaik's Mahabharata Vira Quadrilogy from the Kurukshetra Chronicles, which detailed, in annual installments, the lives of four great warriors of the Hindu epic, Mahabharata. Guest artist Bijay Kumar Sahoo from the Orissa Dance Academy in India was sponsored for this performance.

The introductory piece, a three minute musical masterpiece entitled Kurukshetra, was accompanied by a poem of the same name by Devraj Patnaik displayed on video overhead above the stage, immediately after Chitralekha has departed from bringing the offerings of incense and lamp to Lord Jagganath. In very few lines, the scrolling poem gives the jest of the great epic Mahabharata.

The next item was the unforgettable Megh Pallavi, brilliantly choreographed to accommodate seven dancers. Ellora Patnaik and Devraj Patnaik, Bijay Kumar Sahoo, Tanya Raha, Malini Guha, Prithula Prosun, and Ellora Jalali poured forth emotion and energy in a storm of synchronicity not likely to be rivaled, evoking images of the cathartic rupture of clouds that the name succinctly implies.

Ganga was performed by Chitralekha, Ellora, and Devraj Patnaik and Bijay Kumar Sahoo. This unique Abhinaya links the three major deities of Hinduism, Brahma, Vishnu, and Shiva through their relationship to Ganga. Her life-tale is related beginning with her origin from the toe-nail of Lord Vishnu as Brahma gave homage to his fifth avatar Bamana, to her preservation in the Jatta of Lord Shiva, to her eventual descent to earth through the penances of Lord Rama's ancestor Bhagiratha.

The intermission was followed directly by the Oriya Dance Drama Bhishma, the most elaborate and expansive dance drama ever staged by Chitralekha Odissi Dance Creations. Bhishma is the protector of the kingdom of Hastinapura, called "grandsire" in his later days. Born of the river goddess Ganga, the young Prince forsakes his birth name of Devavrata and swears eternal service to the throne of Hastinapura for the sake of his father King Santanu's happiness. Taking the name of Bhishma, he sacrifices his own happiness for the great capital of Hastinapura, which he swears to protect. This extreme oath foreshadows the many difficulties that he must face in his long and tiring life which result from the conflicts that arise between his great grandchildren, the Kauravas and Pandavas, which leads to the great Battle upon Kurukshetra.

There was a cast of twenty-five, highly elaborate costumes, two functional, moving chariots (thirteen feet long and eleven feet high) and five thrones carved with precise replicas of reliefs from Temples of Orissa created by acclaimed local artist Sadanand Benegal, a bed of one-hundred five arrows, pyrotechnics to enhance the clamor of battle, and English surtitles projected on digital overhead above the proscenium. Some of the leading roles and outstanding performances were played by Bijay Sahoo as Santanu, father of Bhishma, Prithula Prosun as Ganga, mother of Bhishma, Minakshi Natarajan as Satyavati, the Fish-maiden, second wife of Santanu, the princess Amba who is the cause of Bhishma's death, played by Ellora Jalali, the principal role of Bhishma by Devraj Patnaik, and the almighty Lord Krishna played by Ellora Patnaik.