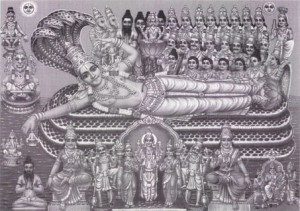 Nrutya Jaagarana was a glittering selection of repertoire in the traditional order, beginning with Shantakaram Mangalacharan. The devotees enter and pay homage to Lord Jagannatha by offering flowers at his feet. Upon asking forgiveness from Mother Earth, they then dance the sloka (Sanskrit verse) to praise Lord Vishnu and glorious attributes. The devotees sing, "Homage to you, O Lord Vishnu! Remove our sins from us, O Lord of the Universe!" Composed by (the late) Sangeeta Sudhakar Balakrushna Das and choreographed by (the late) Padamshri Pankaj Charan Das, this piece was performed by Ellora Patnaik, Devraj Patnaik, Ankita Sarker, Shukla Fuad, Puja Hore, Tia Guha, Pamela Bhattacharjee, Paloma Guha, Sheena Bhattacharya, Paula Zaman, Nisha Chatterjee, and Nipa Chakraborti.

The third item featured the second performance of Devraj Patnaik's choreography of Kedar Pallavi, which had its World Premiere at the 2008 CanAsian Dance Festival earlier that spring. The music to Kedar Pallavi was Devraj's first ever professional composition, created in 1997 in collaboration with Jyotindra Prasad Mishra. This duet was presented by the brother-sister tour de force, Ellora and Devraj Patnaik. After the intermission, Chitralekha Patnaik presented her World Premiere choreography of traditional Oriya song Baajilaani Baajiba. The hero says to his beloved, "My flute has been, still is, and always will be singing your name, O Round Eyed One!"

A quartet rendition of the Das Avatar, from 12th century poet Jayadeva's Geet Govinda, was the next piece. The poet describes Lord Vishnu, the Preserver of the World, coming down in ten forms to cleanse the world of evil forces. He says that Lord Vishnu came down as Matsya (the Fish), Kachhapa (the Tortoise), Sukara (the Wild Boar), Narahari (the Man-Lion), Bamana (the Dwarf), Bhrugupati (the Furious Sage), Rama (the Golden Bowed One), Haladhara (the Tiller), Buddha (the Spreader of Mercy), and Kalki (the Ultimate Destroyer who is yet to manifest). Composed by (the late) Pandit Bhubaneswar Mishra and choreographed by (the late) Padmabibhusan Kelucharan Mohapatra, this piece was presented by Tia Guha, Pamela Bhattacharjee, Pallavi Baluja, and Ankita Sarker.

The final piece was Moskya Nata, a trio presented by Chitralekha Patnaik, Ellora Patnaik, and Devraj Patnaik. Mokshya means salvation. In this piece, the dancers enter and dance to non-stop repeated rhythmic syllables leading into the final sloka (Sanskrit verse) which praises the higher being, and the devotees ask for release of their souls from their bodies and from their surroundings of worldly bondage. Mokshya Nata was composed by (the late) Pandit Bhubaneswar Mishra and choreographed by (the late) Padmabibhusan Kelucharan Mohapatra.