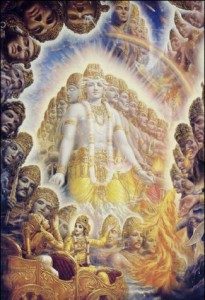 The grand conclusion of the Mahabharata Vira Quadrilogy from the Kurukshetra Chronicles, Arjuna, was the longest show CODC has ever staged, and was structurally unique among the chapters of the Quadrilogy in that it was not preceded by a first act of pure Odissi, because the sheer volume of content necessitated a five hour show: Eighteen scenes spread over three acts with two intermissions. The introduction was once again the Kurukshetra Poem which scrolled on a screen and gave a jest of the Mahabharata in only a few lines.

The Oriya Dance Drama 'Arjuna' began with Pandu, rather than Arjuna, revealing not only his background story, but those of his wives Kunti and Madri and their tales in the birth of the Pandavas. Scene two showed young Arjuna's skills and Drona's pride for him. Scene three introduced the young Krishna upholding the Govardhan mountain and giving Indra the boon that his son Arjuna would be guided by him. Scene four was the Swayamvara of Draupadi where Karna is denied the right to win her hand while Arjuna in guise wins her. Scene five is the razing of the Khandava Forest and scene six is where Arjuna kidnaps the princess Subhadra.

Act Two began with Draupadi Vastra Harana, the most famous and climatic episode in the Mahabharata from the game of dice to the disrobing of the heroine Draupadi. The Pandavas went into exile and Arjuna on his quest for divine missiles taking him to the heavens. In the heavens he learned to dance and when the beautiful Urvashi accosted him he denied her. She cursed him that who would remain a eunuch for one year. In his guise of Brihannala, a eunuch dancer, he defeats an attack from Hastinapura. Krishna goes to the kingdom of Hastinapura for peace but is denied which confirms war.

Act Three began with the Bhagavat-Gita with Krishna and Arjuna on their chariot and the scene ended with the glorious Vishwaroopa which CODC projected onto their screen. Scene fourteen to seventeen dealt with the death of Abhimanyu, Jayadratha, and Duryodhana. Ashwathama went to repent at Vyaasa's ashram and the Pandavas returned to Hastinapura victorious. When the great grandsire Bhishma is finally at rest, the Mahabharata is complete.

Arjuna featured numerous novelties of presentation, including a comedic scene of live instruction as Arjuna was taught dance by the Apsaras in the heavens, several segments in which characters on the video projection screen interacted with characters on stage, and a scene with live pakhawaj as Brihannala teaches dance to Uttara. Among the particularly thrilling scenes were the shaming of Draupadi, after Yudhisthira's defeat at dice by Shakuni, the Vishwaroopa, and the battle at Matsya in which Devraj, in the role of Arjuna, in disguise a Brihannala, in the garb of a woman, defeating eight male warriors of Hastinapura (played by women dressed as men).

It also saw the cast reach the fullest height of their artistic expression, as was appropriate for an epic conclusion. Prithula Prosun and Laxmi Parthasarathy played Kunti and Madri, respectively; Mayukh Mitra and Pallavi Baluja portrayed Bhima and Duryodhana; Minakshi Natarajan played Draupadi; and Ellora and Devraj Patnaik starred as Krishna and Arjuna.