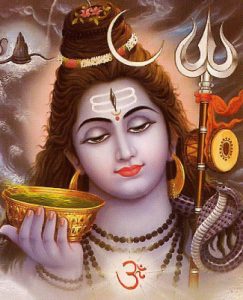 Om Namah Shivaayah was presented to a sold-out audience on May 1, 2005 at the Living Arts Centre in Mississauga. The original cast of five consisted of Chitralekha Patnaik, Ellora Patnaik, Devraj Patnaik, Malini Guha, and Prithula Prosun.

The title piece and introductory piece, Om Namah Shivaayah, featured the entire cast, and is an invocation to Lord Shiva, who is Nattaraja, the God of Dance. The devotees enter and offer praise to the great Trisula (Trident) of Lord Shiva, since he is not visible to them. They praise him in the sloka (Sanskrit Verse) by saying, "With the crescent moon in His matted locks and third eye which channels fire, holding the Ganga River in his top-knot, serpents adorn His body, throat, and ears. With eyes of destruction, garbed in the skin of the tiger, He blesses those of the three worlds who have good Karma."

Om Namah Shivaayah was followed by Battu Nrutya, performed by Devraj Patnaik, Malini Guha, and Prithula Prosun. The item honours Lord Battuka Bhairava, one of the 64 terrifying aspects of Lord Shiva. The choreography draws inspiration from beautiful sandstone statues from the Temples of Bhubaneswar like Lingaraj, Rajrani, Mukteswar, and Bramhagiri.

The final item before intermission, HariHara, is a series of comparisons between Lord Vishnu, played by Ellora Patnaik, and Lord Shiva, played by Devraj Patnaik, who also composed the and created the attendant choreography. It describes Vishnu as black and Shiva as white. He has two eyes and He three. He drinks milk and He poison. He is beloved of Laxmi and He is beloved of Parvati. "Remove our sins from us as one, O HariHara! You are Lord Vishnu and you are Lord Shiva!"

The evening resumed with Shiva Panchaka, which depicts the tale of the Love God Madana, who struck Lord Shiva with his flower arrows, causing him to fall in love with the Goddess Parvati, and the subsequent destruction of his physical form by Lord Shiva. This was performed by all five dancers of the performing unit.

The highlight of the evening was the final performance, the 31-minute abhinaya, Shiva Naba Rasa, composed and choreographed by Devraj Patnaik, and performed solo by Ellora Patnaik. The music for Shiva Naba Rasa was composed in Bhubaneswar, Orissa, India in January of 2005. Devraj commissioned Sanskrit lyrics from HH Mahamedhanandanatha Saraswati, who composed in the style of Sardula Vikridita Chanda, said to be analogous to the footsteps of the tiger in its distribution of beats. In Devraj's 'Shiva Naba Rasa' each Rasa encompassed a tale of Lord Shiva in accordance to the Rasa, and was composed to a particular Raga (melody) and Tala (time cycle) as appropriate to its nature. The piece was preceded by an introductory seminar by Devraj Patnaik, who explained the process by which the work was created and the meaning of the Sanskrit Slokas.

The full order of Rasas was as follows:

Audience response to the performance was so enthusiastic that a slightly shortened version was remounted by Chitralekha, Ellora, and Devraj at the Winchester Street Theatre in Toronto, July 1st and 2nd, 2005.