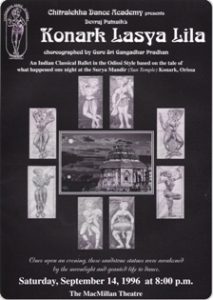 The event was presented by the Performing Unit of Chitralekha Odissi Dance Creations on September 14, 1996 at the MacMillan Theatre in Toronto to an audience of 777. A trio of guest artists from the Orissa Dance Academy of Bhubaneswar, Orissa, India was sponsored to participate in this event: Yudhisthira Nayak, Y. Ashakumari, and Lipsa Dash.

The evening began with Suryaastaka, a Mangalacharan (an Invocational Item) to Surya (the Sun God), with music by Bijaya Kumar Jena and choreography by Devraj Patnaik performed by Chitralekha Patnaik, Y. Ashakumari, Lipsa Dash, Ellora Jalali, Ronjana Sen, Amrita Roy, and Prithula Prosun. "O Lord Surya, the First God, you are mounted upon your great chariot driven by seven white horses. O Lord of a thousand rays, bless us with your eternal divine light!"

This group item was followed by Aravi Pallavi, as choreographed by (the late) Padmabibhusan Kelucharan Mohapatra, composed by (the late) Bhubaneswar Mishra and performed by the three guest artists from the Orissa Dance Academy.

Chitralekha Patnaik then performed the Sanskrit Abhinaya Ahalyaa, the first chapter of the Pancha Kanya (Five Heroines – Ahalyaa, Draupadi, Kunti, Tara, Mandodari) who are the epitome of pure womankind. It describes the tale of Ahalya from her loyalty to her husband Gautama and being deceived by Lord Indra into loving him such that she is cursed by her husband and transformed into a rock to the almighty Sri Rama in the next era freeing her from her curse by placing his foot upon her. Ahalyaa was choreographed by (the late) Padmashri Pankaj Charan Das and composed by (the late) Sangeet Sudhakar Balakrushna Das.

After the intermission, Devraj Patnaik launched his spell-binding directorial debut, Konark Lasya Lila, with a cast of twelve. Performers included Ellora Patnaik, Devraj Patnaik, Yudhishthira Nayak, Y. Ashakumari, Lipsa Dash, Meenu Maltby, Tanya Raha, Sumona Sen, Sulogna Sen, Sonia Lala, Malini Guha, and Anjali Pathak. Konark Lasya Lila is set in the Surya Mandir (Sun Temple, Konark, Orissa, India), at night, and tells the wondrous tale of the entry of the moonlight, Joshna (played by Ellora), and how, with her enchanting radiance, she awakens the sandstone carvings that dwell in the temple. Each of the statues speaks, and for a short time their limbs can move, allowing them to dance after centuries of stillness.

Konark Lasya Lila also marked the first performance which was graced by the exquisite sculpture of (the late) Sadanand Benegal, who crafted replicas of the Konark Wheel and one of the temple horses, for display in the lobby.