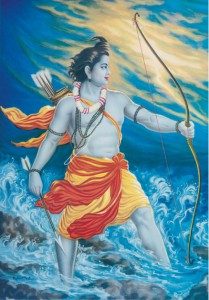 Sing sing the name of the compassionate Sri Ram Chandra
And by doing so, one's sins will be washed away
He has lotus-like eyes, face, and feet

He has many gorgeous attributes, like the love-god, Madan Garbed in yellow robes, he is married to Sita, the daughter of King Janaka

Friend to all, friend to the Sun God, destroyer of demon clans Of the Raghu Dynasty, born of Kaushalyaa and King Dasharatha

On his head is a crown; on his ears are earrings, and jewelry adorns his body With his long arms did he destroy demons like Khara and Dusana" Jai Sri Rama was an exquisite collection of Odissi repertoire which departed with novelty from the traditional pattern of CODC performances by presenting the program as a single act, and leading with the featured item, the world premiere of Sri Ramachandra Kripalu Bhaja Mana, composed in traditional tune and choreographed by Devraj Patnaik to the prose of the poet Tulsidasa.

This magnificent introduction was followed by the energetic and powerful Mohana Pallavi, danced as a duet by Ellora and Devraj Patnaik in splendiferous synchronicity. It was composed by Pandit Bhubaneswar Mishra and choreographed by Padmabibhusana Guru Kelucharan Mohapatra.

Chitralekha Patnaik then performed the Sanskrit Abhinaya Ahalyaa, the first chapter of the Pancha Kanya (Five Heroines – Ahalyaa, Draupadi, Kunti, Tara, Mandodari) who are the epitome of pure womankind. It describes the tale of Ahalya from her loyalty to her husband Gautama and being deceived by Lord Indra into loving him such that she is cursed by her husband and transformed into a rock to the almighty Sri Rama in the next era freeing her from her curse by placing his foot upon her. Ahalyaa was choreographed by (the late) Padmashri Pankaj Charan Das and composed by (the late) Sangeet Sudhakar Balakrushna Das.

Jai Sri Rama concluded with Mokshya Nata, which is the traditional ending of the Odissi repertoire. Mokshya is a symbol of the end where the devotee dances to chanted rhythmic syllables and then prays to the higher being through sloka or Sanskrit verse. The traditional Mokshya Nata is choreographed by Padmabibhusana Guru Kelucharan Mohapatra and the sloka of this version was composed by Bijaya Jena and choreographed by Devraj Patnaik, which honoured Sri Ram, at whose feet the devotee surrenders, and receives enlightenment and freedom from the sins of the world. Ellora Patnaik presented it as a solo as she did for its world premiere in her solo recital at the Konark Dance and Music Festival in 1998.