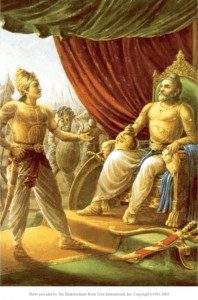 The second installment of Devraj Patnaik's Mahabharata Vira Quadrilogy from the Kurukshetra Chronicles continued with the tale of the sage Drona, the son of Bharadwaja and the Arms Master of Hastinapura.

Drona began, as Bhishma before it, with Kurukshetra Stotra, which inaugurated each performance of the series. It was a three minute musical masterpiece entitled Kurukshetra, and was accompanied by a poem of the same name by Devraj Patnaik displayed on video overhead above the stage, immediately after Chitralekha has departed from bringing the offerings of incense and lamp to Lord Jagannatha. In very few lines, the scrolling poem gives the jest of the great epic Mahabharata.

This was followed by Jog Pallavi, a rhythmically intricate piece performed by six dancers: Ellora Patnaik, Devraj Patnaik, Tanya Raha, Malini Guha, Prithula Prosun, and Ellora Jalali The piece which slowly builds, accumulating enormous and frenzied visceral intensity which climaxes in thirteen beats. Jog Pallavi was first presented at the CanAsian Dance Festival in 2003 and was called Pallavi Science, a duet by Ellora and Devraj Patnaik.

The final piece before intermission was the Sanskrit Abhinaya Bharadwaja, which relates the unusual but thrilling origin-tale of that great sage who was ejected from the womb of Mamata to be raised by wind-gods. It proceeds to offers praise to his life and works, and reveal the details of the birth of his son, Drona, including the aetiological origin of his name.

Upon returning from intermission, the audience was treated to the Oriya Dance Drama Drona. Drona, son of the sage Bharadwaja, is the master of arms and military science in the kingdom of Hastinapura. Upon being betrayed by his best friend, King Drupada of Panchala, the impoverished and vengeful Drona found employment as teacher to the young Kaurava and Pandava princes. Drona's determination to make Arjuna the greatest archer in the world inflicts injustice upon innocents. He tactfully plans and orchestrates his revenge, which worsens the conflict between himself and Drupada, creating an escalating vendetta which is only resolved in the great Battle upon Kurukshetra.

The dance drama both included and expanded upon the theatrical innovations and successes of Bhishma. Drona saw the live pyrotechnic element replaced with live video, which allowed for the inclusive of narrative and visually spectacular elements which would otherwise prove implausible in live theatre. The seamless interaction between live performers and video was both a landmark and a precedent for future productions. Some of the leading roles and outstanding performances were played by Ellora Patnaik as King Drupada, Drona's childhood friend and enemy, and later in the form of the almighty Lord Krishna, the principal role of Drona played by Devraj Patnaik, Prithula Prosun as Kripi, wife of Drona, Malini Guha as Ekalavya the Hunter, and Minakshi Natarajan played Draupadi, the heroine of the great epic.