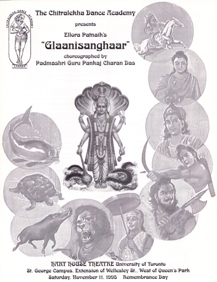 Glaanisanghaar, meaning 'The Destruction of Evil', is an Odissi Ballet choreographed by (the late) Padmashri Pankaj Charan Das to music composed by (the late) Sangeet Sudhakar Balakrushna Das.

The performance began in front of a full capacity audience with Shiva Stotra, an invocation in honour of Lord Shiva created by Ravindra Jain, sung by Suresh Wadekar, and choreographed by Chitralekha Patnaik. Lord Shiva's dark form as Lord Nataraj (The God of Dance) is wrapped about the neck with black cobras, and his wife Parvati and son Ganesh sit at his side. It was performed by Chitralekha Patnaik, Meenu Maltby, Joya Banik, Tanya Raha, Anjali Pathak, and Sumona Sen.

The next choreography was the twenty minute Sanskrit Abhinaya, Madhuraastaka, by (the late) Padmashri Pankaj Charan Das and performed by Chitralekha Patnaik. Madhuraastaka honours Lord Krishna and tells his tale from infancy to adolescence. "All aspects of the Lord of Sweetness are Sweetness personified!"

Glaanisanghaar is the tale of Das Avatar, the Ten Incarnations of Lord Vishnu; a Sanskrit Text which inaugurates the Geeta Govinda, written by 12th century poet Jayadeva. The poet describes the ten incarnations in the Geeta Govinda with great brevity due to the vastness of the tales, however in Glaanisanghaar the Oriya lyrics are just as brief but the ballet has incorporated more elaboration of the tale through music.

Lord Vishnu came down in the form of:

Glaanisanghaar is CODC's most enduring and popular production, and has since been remounted a total of twelve times, including performances in East Lansing, Buffalo, Virginia Beach, San Jose, the Canadian Museum of Civilization, and a full scale theatrical remount in Toronto in 2008.