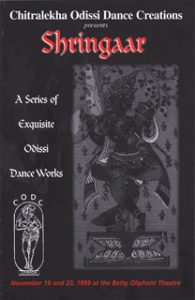 Devraj Patnaik conceived the many facets of Shringaar (Love) as the unifying theme of a selection of inspiring Odissi works, and this conception came to glorious fruition on November 19-20, 1999 at the Betty Oliphant Theatre in Toronto.

The performance items were composed for Odissi for items previously extant, and drew heavily from the Geeta Govinda of the famous Sanskrit poet Jayadeva, who wrote extensive verse in praise of Lord Krishna and his flirtatious dalliances among the milk-maidens.

Chitralekha, Ellora, and Devraj Patnaik danced Kasturi Tilakam Mangalacharan in honour of Lord Krishna depicting the glory of his raiment. Lord Krishna's milkmaids surround him play their love games with Him as He flirts with each and every one of them.

A special version of Saveri Pallavi crafted to epitomize the Rasa of Shringaar was composed by Chitralekha Patnaik for a trio of dancers: Tanya Raha, Malini Guha, and Sumona Sen. Chanda Charchita, a sloka from the 12th century poet Jayadeva's Geeta Govinda, a playful celebration of the varied and intense relationships between Krishna and the milkmaids of the land of Gokul, was performed by Devraj Patnaik, Tanya Raha, and Malini Guha.

Lalita Labanga, another sloka from the Geeta Govinda depicting the emotions of the milkmaids who yearn for Krishna in the season of spring. This piece, composed by (the late) Pandit Bhubaneswar Mishra, was choreographed by (the late) Kelucharan Mohapatra and arranged by Devraj Patnaik into a quartet for Ellora Patnaik, Tanya Raha, Sumona Sen, and Malini Guha. Devraj made a few special appearances in this piece as well.

The next item was an Oriya Song, in traditional melody Mishra Aravi, was Naachanti Range Sri Hari. The thunderous rhythm of the feet of Ellora and Devraj Patnaik marked a sharp departure from the softness of the preceding items, as they performed the singularly unique Sri Krishna Tandava to a receptive and vociferous audience.

Chitralekha Patnaik then presented the solo Oriya Abhinaya Dekhiba Paraa Aasare, unique in that it represents a reversal of the traditional embodiment and object(s) of jealousy, in that the Gopis are jealous of Radha. Tanya Raha and Malini Guha gave a stellar performance of the Oriya song Malli Maala Shyama Ku Debi, a creation of the 17th century Oriya poet Upendra Bhanja, which tells of a lovers' quarrel between Krishna and Radha, which is resolved when Radha, overcome by his charm, can no longer sustain her anger. She says, "I shall place a Malli Flower garland around my Lord Krishna."

The final item was the joyous celebration Jhulana Utsav, in which Radha and Krishna sit together in bliss upon their swing in the heavens as their devotees play and sing, filling the heavens with the resonance of their rejoicing. It was a cast of eight consisting of Ellora Patnaik, Devraj Patnaik, Anjali Pathak, Ellora Jalali, Ronjana Sen, Sumona Sen, Tanya Raha and Malini Guha. Shringaar marked the first use of the name Chitralekha Odissi Dance Creations.