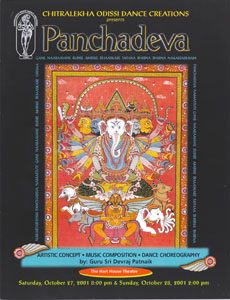 The World Premiere of Panchadeva, a landmark Odissi work with all original music composition and dance choreography by Devraj Patnaik, packed Toronto's Hart House Theatre with Odissi fans eager to partake of the two hour spectacle.

The evening was inaugurated by an explosion of pyrotechnics: Homage to flag of Chitralekha. The dazzling flame served as a fitting inception to Panchadeva Stotra, a collective invocation to the five deities (Surya, Durga, Vishnu, Shiva, and Ganesh without individuation). Ellora and Devraj Patnaik, Sandhyadipa Kar, Tanya Raha, and Prithula Prosun formed the Panchadeva with their bodies as Chitralekha Patnaik entered the stage and lit the candles before Lord Jagganatha. "O Ganesh, Vishnu, Shiva, Durga, and Surya, without separating you five we bow down to you as one entity!"

The invocation Sri Suryanarayan, which offers homage to the Sun God Surya, was performed by Chitralekha, Ellora, and Devraj Patnaik, Sandhyadipa Kar, Tanya Raha, Malini Guha, and Prithula Prosun. A notable facet of the choreography was the orbit of the dancers about the sun (Chitralekha) in varied rotations, creating a striking image of our solar system. The devotees then pay homage to his radiant aspects and describe him mounted upon his great chariot driven by seven white horses eminating a thousand rays, "O Lord Surya, throughout the just eras do we pay homage at your feet!"

The conceptual brilliance of Vande Devi Mataram lies in that it is an invocation to the Mother Goddess in her fullest unity, focusing on the aspects of Gayatri, Savitri, Saraswati, Bhoomi, and Kali. Gayatri is the young one holding the Rig Veda and wearing a sacred thread. Savitri is the youthful one wielding a trident and riding her bull. Saraswati is the wise one upon her swan and holding her six-string Bina. Bhoomi is the truthful one who is Mother Earth. Kali is the Great Witch Form with great fangs and dwells in the gaveyard.Each form of the goddess began with a Pallavi, and each had its own selected Raga, Tala, description, and invocational song. This exceptional choreography was performed by Ellora Patnaik, Sandhyadipa Kar, Tanya Raha, Malini Guha, and Prithula Prosun. The devotees say, "By remembering these five Mother Goddesses always, one sins will be removed!"

Once upon a time on an auspicious day, there was a Jugulbhandi in the Ananda-Tandava of the Preserver and Destroyer. Ellora and Devraj Patnaik performed the magnificent duet HariHara as only Ellora and Devraj can. It describes Vishnu as black and Shiva as white. He has two eyes and He three. He drinks milk and He poison. He is beloved of Laxmi and He is beloved of Parvati. "Remove our sins from us as one, O HariHara! You are Lord Vishnu and you are Lord Shiva!" Reminiscent of Ardhanariswara, this comparison of Vishnu to Shiva was lauded as the highlight of the entire production.

After the intermission came the Oriya Dance Drama Jai Sri Ganesh, which related the extraordinary tale of the life of Ganesh, from his mystical birth to his decapitation and subsequent resurrection by Lord Shiva, and the origin of his elephant head. Jai Sri Ganesh featured a cast of twenty five, with full costume, moving lights, fogging, and laser effects.