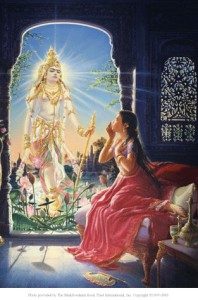 The third installment of Devraj Patnaik's Mahabharata Vira Quadrilogy from the Kurukshetra Chronicles continued with the tale of the generous warrior Karna, the son of Surya the Sun God and Kunti, and the elder brother to the Pandavas, the heroes of the great epic.

Karna began, as Drona, and as Bhishma before it, with Kurukshetra Stotra, which inaugurated each performance of the series. It was a three minute musical masterpiece entitled Kurukshetra, and was accompanied by a poem of the same name by Devraj Patnaik displayed on video overhead above the stage, immediately after Chitralekha has departed from bringing the offerings of incense and lamp to Lord Jagannatha. In very few lines, the scrolling poem gives the jest of the great epic Mahabharata.

The poem was followed by Desh Pallavi, the most recent Pallavi of Devraj Patnaik for a team of six dancers pairing three males and three females. Guest artists Bijay Kumar Sahoo and Lingaraj Pradhan from the Orissa Dance Academy joined Devraj Patnaik to dance with Ellora Patnaik, Malini Guha, and Prithula Prosun. The beautiful melody of Desh gave life to the pairs as each one came forward to elaborate each a time cycle of 9, 10, 11, 12, 13, and 14 beat pulses over a 4 beat time cycle.

The next piece was the Sanskrit Abhinaya Parshurama which in itself being 20 minutes in length was almost considered a small Odissi Ballet. Parshurama, the sixth avatar of Lord Vishnu was teacher to all three Bhishma, Drona, and Karna. The tale of Parshurama is conveyed from his birth, to decapitating his mother Renuka as his father Jamadagni commanded, to him cleansing the world of the warrior race twenty one times. It was presented by Chitralekha Patnaik, Ellora Patnaik, Devraj Patnaik, Malini Guha, Prithula Prosun, Bijay Kumar Sahoo, and Lingaraj Pradhan.

After the first act, the penultimate story of the Oriya Dance Drama related the tale of the generous warrior Karna, which was presented as the second and third acts of the evening. Karna is son of the Sun-God Surya, the generous warrior whose tragic tale will strike the hearts of one and all. Born protected by impenetrable armour and divine earrings which were attached to his body, the baby is abandoned in a river by his youthful mother Kunti, where he is found by the charioteer Adhiratha. Though Adhiratha takes him as his own son, Karna does not accept the ways of a charioteer. Karna upholds his bow in life, but is denied recognition as a warrior by all except for Prince Duryodhana, the eldest Kaurava and central antagonist of the Mahabharata. His loyalty to Duryodhana leads him to the great Battle upon Kurukshetra.

In addition to the theatrical elements presents in Drona, and Devraj's video projection cameo as the gigantic fire-wielding and fire-breathing monster Ghattotkacha, Karna also featured the two guest artists from India in the roles of Arjuna and Yudhishthira. Prithula Prosun gave an outstanding performance as Kunti, Bijay Sahoo played the role of Arjuna, the only single warrior to defeat Karna, played by Devraj Patnaik, and Ellora Patnaik reprised her main role as Krishna.