This drum, also known as the Pakhawaj, is integral to Odissi Dance and Music. Of old, it was solely used as an accompanying instrument to Odissi Dance. The use of Mardal in this context can be traced back to the time of the Natyashastra, as evidenced by numerous palm-leaf inscriptions which have been preserved through the ages. Mardal is also depicted in the sandstone images of musicians carved in the temples of Bhubaneswar, Puri, and Konark. It is referred to severally in the works renowned musicians and poets, such as Gopalkrushna and Upendra Banja. In the last century, many renowned masters have contributed to its grandeur, including (late) Guru Sri Mahadev Rout and Pandit Ksethra Mohan Kar.

The Mardal was taken to new heights by Padmabibhushan Guru Kelucharan Mohapatra, who later conveyed these techniques to Guru Banamali Maharana, who is in turn recognized as the Father of Odissi Mardal. Their refinements of technique paralleled those which were intitiated by the great gurus of dance. Today, the Pakhawaj still accompanies the dance, but it also stands alone as a vehicle for solo performance. A few of the renound Mardala players in the world today are the father himself Guru Banamali Maharana, Gangadhar Pradhan, Sachitananda Das, Dhaneswar Swain, Bijaya Barik, and Devraj Patnaik.

A Tala is a looped cycle of beats set to specific number. If two Talas have the equivalent number of beats, they are differentiated by their partitions. Some of the popular Talas in Odissi are Ekataali (4 beats), Ardhajhampa (5 beats), Roopaka (6 beats), Khematta (6 beats), Tripatta (7 beats), Jhampa (10 beats), and Jati (14 beats). Some traditional rhythms in Natangi (traditional songs) that are already established give Odissi its own uniqueness such as Aditaala (16 beats), Sarimaana (14 beats), Matthaa (10 beats), Kudduka (12 beats), and Aaddataali (14 beats), partitioned at a complex 4, 3, 4, 3.

Bol is the language of the drum. The rhythms played on the Mardal Drum are also recited by the Mardala Player to command the dancer to dance the Bol. Single bols are put together to form rhythmic sentences such as DHEI, THEI, TA, KA, GA, TE, TTE, and DIN. Four-syllable bols, like KARATAKA and TEREKETTE, and also quite popular. A Tyhai is a single bol repeated three times to mark the beginning or end of a segment in Odissi music. Some of the most common are KARATAKAGADIGANADHA and TINGENEGADIGANADHA. 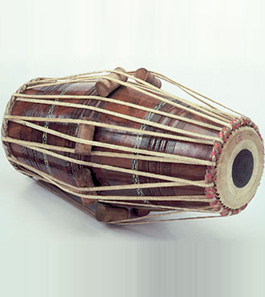